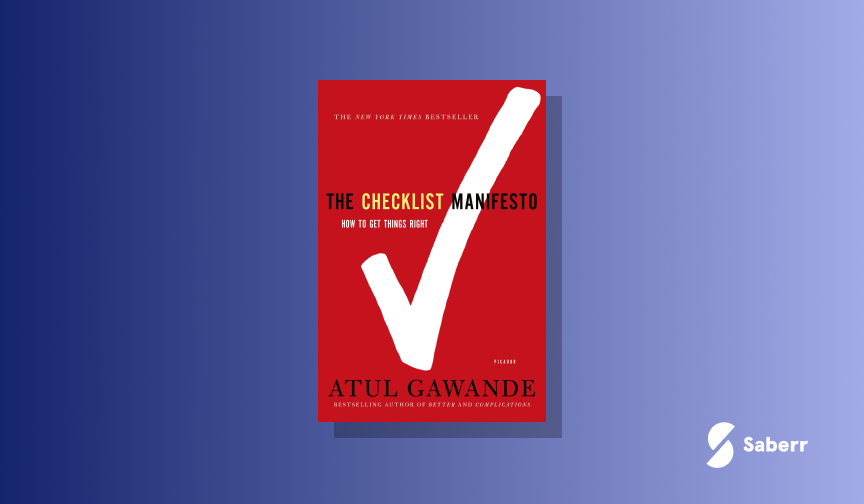 ‍When the simple is powerful. The Checklist Manifesto is the tale of how Gawande (an eminent surgeon) made a movement out of checklists. The approach took shape from observing checklists used in hospitals and then trialing a new approach across eight hospitals internationally.

“In every site of the eight hospitals introduction of the checklist had been accompanied by a substantial reduction in complications. In seven out of eight it was a double digit percentage drop”.

The inspiration from Gawande came from learnings both from healthcare and also other industries that have benefitted from checklists:‍

Airlines have been using checklists for years. Daniel Boorman, has spent the past 20 years developing flight checklists for pilots using Boeing airplanes. He’s behind some of the checklists that enable a pilot to say “cleared for take off”. He explains “there are good checklists and bad”. “Bad checklists are vague and imprecise. They are too long; they are hard to use; they are impractical. They are made by desk jockeys with no awareness of the situations in which they are to be deployed. They treat the people using the tools as dumb and try to spell out every single step. They turn people’s brains off rather than turn them on. Good checklists, on the other hand, are precise. They are efficient, to the point, and easy to use even in the most difficult situations. They do not try to spell out everything — a checklist cannot fly a plane. Instead, they provide reminders of only the most critical and important steps — the ones that even the highly skilled professionals using them could miss. Good checklists are, above all, practical.”‍

Construction is another industry which commonly makes use of checklists — in particular in hugely complex construction projects. One of the key checklists in construction projects is was the Submittal Schedule. “It was not assumed that [everything] would work perfectly. Quite the opposite. The assumption was that anything could go wrong, anything could get missed. What? Who knows? That’s the nature of complexity. But it was also assumed that, if you got the right people in the room and have them take a moment to talk things over as a team rather than as individuals, serious problems could be identified and averted. So the submittal schedule made them talk”.‍

Even in investment some of the best investors use checklists to ensure discipline and address bias in their investment decisions. You can read more about Warren Buffet’s Investment Checklist here.

The benefits of checklists range from the simple to the more complex. Under conditions of true complexity, unpredictable situations, where the knowledge required is exceeds that of any one individual, checklists that dictate every step will fail. People need room to adapt and coordinate with others. To solve a complex problem the group needs to be able to measure progress towards a common goal.

For checklists to achieve that balance — they have to take two almost opposing forms. They supply a set of checks to ensure the stupid but critical stuff is not overlooked, and they supply another set of checks to ensure that people talk, coordinate and accept responsibility whilst being left the power to manage the nuances and unpredictabilities the best they know how.

‍We found the parallels between the journey set out by Gawande and what we are trying to achieve through Saberr's Platform fascinating. In particular the importance of not dumbing down the complexity of teamwork while also to recognising that by triggering the right conversations we can improve team performance. As the author himself indicated “just ticking boxes is not the ultimate goal here. Embracing a culture of teamwork and discipline is!”‍

He also gave some great insights into his pillars of teamwork.‍

And finally but critically

The book also highlighted some of the challenges we can expect to see ahead. Even with a strong evidence-based behind his work Gawande found adoption hard.

“We doctors remain a long way from embracing the idea. The checklist has arrived in our operating rooms mostly from the outside in and from the top down. It has come from finger wagging health officials, who are regarded by surgeons as more or less the enemy, or from jug earned hospital safety officers, who are about as beloved as the playground safety patrol. Sometimes it is the chief of surgery who brings it in, which means we complain under our breath rather than raise a holy tirade. But it is regarded as an irritation, as interference on our terrain. This is my patient. This is my operating room. And the way I carry out an operation is my business and my responsibility. Who do these people think they are telling me what to do?”

We see the some of the same challenges facing teams working on teamwork. While there’s a strong evidence base on the importance of teamwork training for improving performance and the happiness of team members, unless they have autonomy to improve as a team and accountability to each other to improve, teamwork training will feel like another top down initiative.

How to improve stakeholder management