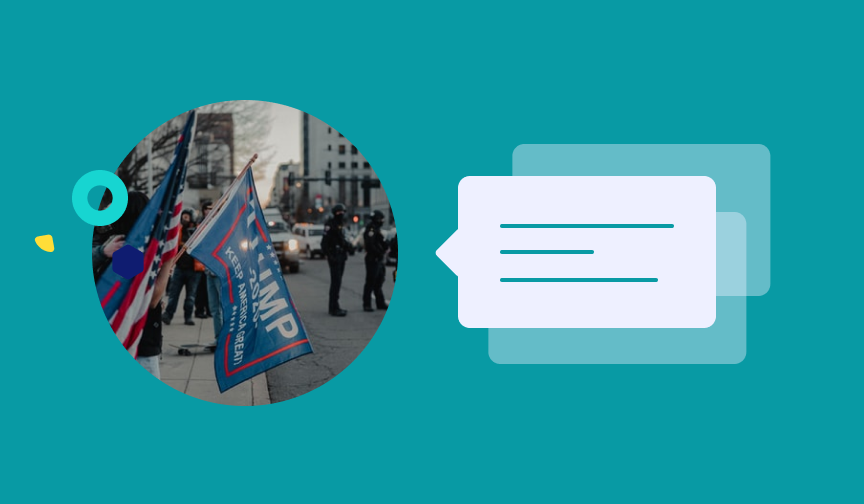 You probably haven’t woken up with an overwhelming sense of apathy today. From apocalyptic to ecstatic, most of us have had a visceral reaction to the outcome of the 2016 U.S. election. Much like with Brexit, these feelings have been reflected the world over with market turbulence as the news broke. Our reactions to events like this are determined by our values system, the deep internal navigation principles we use to make decisions. When someone shows either extreme support or extreme discord with our values then we feel it in a profound way.

So why now? Why is the internet awash with commentary on this particular result? One way or another, why do you feel strongly about this result? At Saberr we attempt to explain complex human feelings, reactions and interactions by using data. So let’s look at U.S. politics using values data. Our Chief Scientist, Sandy Rogers, scraped the acceptance speeches from the last 16 years of presidential nominations at party conventions to determine the values that were being espoused by each candidate. You know what he found? Minor variations aside, all candidates overwhelmingly convey the same values of change and benevolence.
‍

This is probably because the candidates are ‘humbled by the nomination… grateful to receive… proud to serve… thank you thank you thank you… I love you etc etc’. Obviously there are major differences between Trump and Clinton, and even big differences between Sanders and Clinton but the bulk of most party lines is often the same — ‘we need to come together to make change’. This probably is why, under business as usual conditions, many people do feel apathy toward politicians.

Once you take out the common rhetoric, who do they speak to…

‍If they all promise the same — to take care of you and improve the nation — then how do we tell them apart? In the world of political speech writers, the art of maintaining broad appeal yet speaking to the hearts of a few is called dog-whistle politics. In between the ‘stronger, better, safer, happier’ mantra are certain cues designed to strike a resounding chord with voters of a particular value set. To best understand the values of the subtle (and recently, not so subtle) messages in political campaigns, let’s look at the value sets of the people they appeal to. To do that we took the tweets from the most vocal segments of the electorate in this year’s presidential race — engaged supporters of Hillary Clinton and Donald Trump. In these two groups we see a marked difference in their value sets — meaning the things that drive voter decisions stem from different fundamental motivations.

All values are valuable, even the ones you value less….

‍Some of you are probably experiencing another surge of emotion from looking at this data right now. If you find yourself strongly objecting to certain values then it’s important to remember that all values are valuable, you might have preferences but all of us hold all values to some extent. Philosophers might still debate whether true selfless altruism exists, but according to our data we haven’t yet found a person who doesn’t value even the smallest desire for furthering themselves — helping yourself thrive is a valuable thing, it’s the degree to which we prioritise this and other values that sparks the disagreement we see playing out in today’s political discourse.

‍If we expect the world to agree upon a universal ranking of the most important values then we’ll be fighting for a long time to come. Getting me to change my values is painful for me and painful for you. That’s not to say people’s values can’t change, they just usually change slightly and slowly.

‍Unfortunately for the leaders of the US and indeed the UK, who are both looking to heal bitterly divided nations, there a large number of organisational management studies that point to the idea that when people are aligned on their core values the results are more positive and progress is more effective.

‍However, there is hope. What’s really interesting in Saberr’s client work in helping teams work well together is that the highest performing teams don’t necessarily need to have a uniform set of values, what sets high performing teams apart is the level of tolerance that the team members show for each others specific values profiles. This isn’t just fluffy data about people getting along either — Saberr’s team profiling tool can predict which sales team will make more money, just by looking at values, behaviors and most importantly the tolerances of the team members. There isn’t a preferred set of values that always lead to higher performance, but instead having a high level of tolerance for other people’s values means you can turn diversity into a strength.

‍Compassion might not seem like a super strength but the data suggests in fact, it is. If we want to see progress and better outcomes in business as well as in global politics — exercise tolerance.