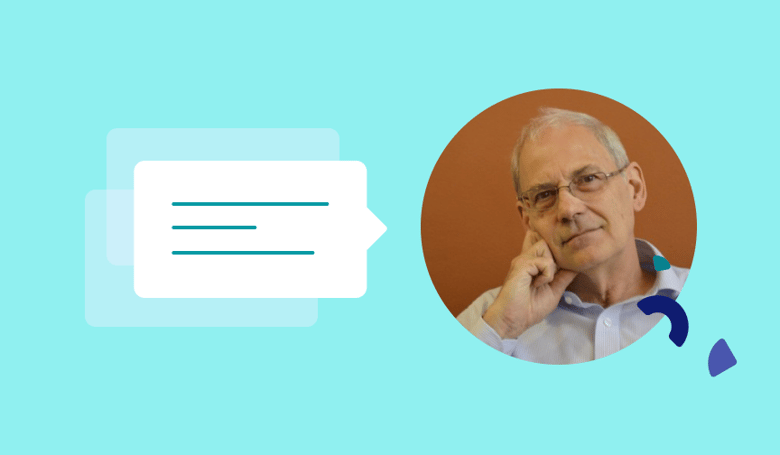 Despite what many people think humans and AI can work hand in hand. Particularly in team coaching, humans and technology complement each other.

I recently had the pleasure of interviewing team coach David Clutterbuck to learn more about his thoughts on how digital and human coaching might be able to work together. Here are some of his expert opinions.

J: How do you approach team coaching and do you think AI could fit alongside your approach?

D: All of my research and my area of interest is about about helping people have the conversations they need to have, getting away from debate or discussion or argument to genuine dialogue. We don’t have enough dialogue in the workplace.

‍That’s one of the things I see Saberr being able to do ultimately, engage people in a high level of dialogue — because you don’t have to prove anything to a bot. It encourages the notion of dialogue as a conversation that you have with yourself as much as with another person. When a bot really works it asks the right questions and helps somebody have that conversation with themselves and reflect on the way they work.

J: What are the most common issues you see teams coming up against and how do you help?

‍D: There’s no simple answer because there are so many things. A good place to start is team contracting, this means the team know what’s expected of each other, how they should behave and what we’re trying to achieve. Teams need to understand how they fit together and how they support each other.

‍The way people act is often motivated by a need to present a persona that fits the cultural norm, for example being hardworking or serious. There’s a risk in trying to fit with the organisation that you get pushed into behaving according to a script rather than being yourself.

“Increasingly what we see is people in organisations are often behaving more like robots than robots.”

J: What impact does coaching have on teams and how will AI change this?

‍D: When it’s done well teams begin to accept and understand each other.

‍Teams are very complex, with hundreds of interactions going on at the same time. Alongside getting work done there’s a huge amount happening emotionally and cognitively for the team members. So part of the role of a team coach is to help teams understand how teamwork works and how deeply their performance is linked to how they work and the people around them.

‍I think the future of team coaching will involve using AI to identify patterns within team relationships. Once AI has worked with lots of teams and team coaches it will be possible for a bot to do the basic interviews we would normally do.

‍I see it finding the patterns I might have missed or not had time to gather. I might interview everyone in the team for half an hour which allows me to get under the surface of the team — to a point. But if we could do a lot more of that analysis before hand — deeper analysis, we’d make progress quicker. For example we might learn who trusts who and how, “I trust you to deliver the goods but not to keep your mouth shut” or we could combine interview outcomes with personality profiles to see how people might respond to coaching.

‍Saberr can help in all the up front analysis. What the bot can’t and never will be able to do is to truly facilitate that intuitive creative conversation that comes out of that data. And this is value of the human/AI partnership.

J: Finally, is there anything you’d recommend to every team whether they have a coach or not?

‍D: Stop and think. Make sure you have time to build the relationship and understand how the team works. When you stop and think, what do you find is the question you should be asking yourselves right now?

David Clutterbuck is an expert team coach and practice leader in international consultancies David Clutterbuck Partnership (DCP) and Coaching & Mentoring International (CMI). His work revolves around helping people and organisations harness the power of dialogue — to have the conversations that will bring about positive change.

‍He is also visiting professor to the coaching and mentoring faculties of Oxford Brookes University, Sheffield Hallam University and York St John. In 2011, he was voted Coaching at Work magazine’s Mentor of the Year. He also co-founded the European Mentoring and Coaching Council, for which he’s now International Special Ambassador.