One of the most common questions that we hear is how can we encourage everyone to give and receive feedback more often. As Ken Blanchard said  “Feedback is the breakfast of champions.” It’s also one of the ‘seven habits of effective teams’.

We are excited to be developing features that will make it easier to give and receive feedback and embed it in team practice. There are different ways that you can encourage feedback. Some organizations implement feedback as part of a more formal process. Our approach is to make giving and receiving feedback habitual to create a culture of feedback.

Feedback should be a regular practice not a one-off event. As Ed Batista, the author and coach said  “Make feedback normal. Not a performance review.” And as Elon Musk emphasizes “I think it’s very important to have a feedback loop, where you’re constantly thinking about what you’ve done and how you could be doing it better.”

Here are some of the principles of the approach we are taking and some previews as to how it works.

Make it easy to ask for feedback

One of the first things that can help giving and receiving feedback is making it easy. How can we make a simple process of giving feedback? Having a feedback tool that enables you to give feedback with one or two clicks can really help. Integrating that process into where you work like Slack or Microsoft Teams. Again as Ed Batista said, “We can’t just sit back and wait for feedback to be offered, particularly when we’re in a leadership role. If we want feedback to take root in the culture, we need to explicitly ask for it.” We think a lot about the right triggers to get people to ask for feedback.

One of the biggest problems with feedback is that it’s often perceived to be subjective. That’s because it often is. It’s imperative to ground feedback in something that all parties recognise as important. What topics should we cover when we give feedback? We encourage teams to focus feedback on what the organization and team is trying to achieve. As the Saberr platform is already helping teams define their purpose, goals and the behaviors they expect from each other. It’s possible for us to reinforce these when providing feedback.

Thoughtful actionable feedback becomes easier if you can follow guidance. By offering support and guidance on how to give feedback we can make sure it’s delivered in the right way. Linking feedback to techniques and exercises that support development makes feedback even more actionable.

There’s an ongoing debate. Should feedback be about celebrating the positive? Or should it be focused on the development of our weaknesses?

“There are two things people want more than sex and money… recognition and praise.”

“True intuitive expertise is learned from prolonged experience with good feedback on mistakes.”

In reality as for many things in life the truth is in between. It will depend on the person and the situation. Mary Kay Ash the cosmetics mogul and Daniel Kahnemann the Nobel Prize winning economist would have different perspectives. People respond to a healthy dose of positive reinforcement but we should be open to facing head on blind spots as well.

Great managers and coaches have an understanding of what’s required because they understand the person. Alex Ferguson the hugely successful Manchester United Football Club manager was famous for being able to know when to give people the “hair dryer” (a strict and vocal rebuke) and when to put his arms around someone in need. “Some of that will just be by setting an example but the bulk will come from having a keen understanding for the character of their employees and an empathy for them when they are weathering difficult circumstances” (Leading: Alex Ferguson Autobiography). The Saberr platform offers a number of profiles, exercises and techniques to build this understanding of the team so that you can coach based on a true understanding of the individual.

When should we give feedback? A lot has been written about “in the moment feedback”. It’s true there are times when giving feedback close to a specific instance can be beneficial. Feedback that relates to a specific topic where timeliness is important. However, real-time feedback isn’t the same as impulsive feedback. Deliver your feedback so people can take away actionable steps for improvement. We also need considered feedback based on a longer term pattern of what we’ve seen from multiple parties. Tools that can help capture feedback in the moment but also show patterns over time can help support both approaches.

Keeping track of how much feedback has been given and received enables you to understand if the culture of feedback is growing.

Within the Saberr platform we give the opportunity to ask for feedback and receive feedback. There’s a strong focus on positive reinforcement with a specific category of feedback called celebrations.

Our feedback model reinforces the other team habits. For example you can give feedback against team behaviours that were developed using the interactive exercise from the Library. 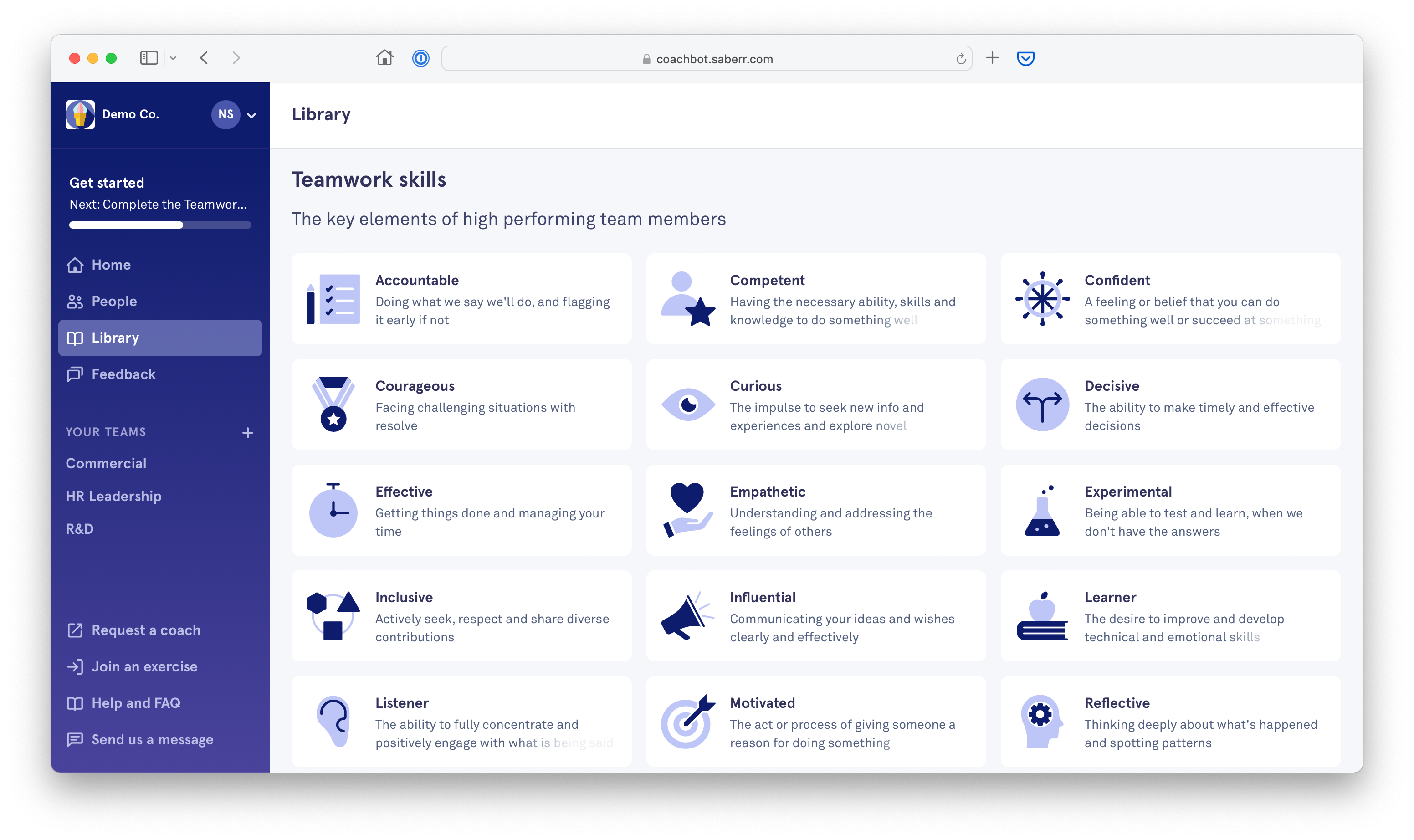 You can see latest feedback but also see patterns in the feedback that you’ve received over time. And we can report on which individuals and teams are developing the feedback habit.

We are very excited to be launching this latest addition to our features to reinforce the seven habits. We’d love to hear from you about your interest in feedback and successes and failures in creating a feedback culture.

Next Generation Leadership: How to Develop Leaders in Your Organization