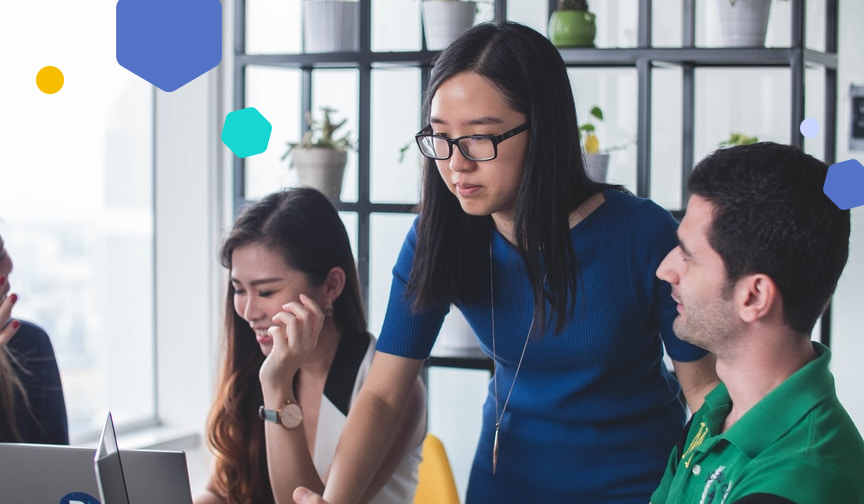 The age-old question—what’s the difference between leadership and management?

With both terms often used interchangeably, it can be difficult to know how they compare.

In this article, we’ll look at the differences between managers and leaders, discuss how it’s changed over time, and outline the leadership qualities that managers must possess in order to succeed in the ever-evolving workplace.

The difference between managers and leaders

So, what is the difference between a manager and a leader?

Well, if we consider the “old school” view of what a manager does, then it would be to focus on getting things done, delegating tasks, and following rules.

Leaders, on the other hand, have always been more concerned about leading for the future, not the “here and now”. They want followers, not subordinates, and they want to shape the culture.

But what about now? Is this distinction still relevant today?

The short answer is not so much.

According to John O’Leary, leadership and management really aren’t all that different. In fact, the only real difference is the focus of the person.

But in today’s world, shouldn’t a great manager focus on both?

After all, with organizations increasingly prioritizing development, and subsequently shifting towards a culture of coaching, managers have no choice but to focus on getting the best from the people they lead.

So, to answer the original question on whether managers and leaders are really all that different, the simple answer is that in today’s world, managers need to have leadership qualities in order to thrive. And by thrive, we mean develop effective and high-performing teams.

Which means that they can no longer just execute the direction set up by leadership, they now have to take the role of leader. Which ultimately means taking the role of coach.

The leadership qualities that managers need in order to thrive

The next question, therefore, is what are the leadership qualities – or leadership behaviors – that managers need in order to lead a successful team?

1. The ability to build relationships

To start with, they can establish strong connections with others, including their team members. In fact, they are emotionally intelligent, empathetic, and are able to build trust.

2. The ability to develop people

Successful managers not only understand the strengths, weaknesses, and motivations of their team, but they use this insight to coach each team member, so that they develop not only individually, but also as a team.

3. The ability to drive change

They will work with their team to set goals that align with both the organization’s vision and the team’s vision.

4. The ability to inspire others

Great managers can influence the performance of their team, through recognition, motivation, and overall positivity. They work closely with their team to identify problems and build on their weaknesses.

5. The ability to think critically

They can critically evaluate information in order to identify and resolve problems. They are truly resilient.

6. The ability to communicate clearly

Great communication is crucial for the success of any team, which is why it’s so important that managers can communicate both clearly and effectively. In fact, managers need to be able to encourage their teams to share their opinions, actively listen to their team members, and provide constructive feedback.

7. The ability to create accountability

In order for a manager to display leadership qualities, they must also be able to hold both themselves and their teams accountable for not only their performance, but also for the things they’ve committed to do.

The future of management vs leadership

The old-fashioned distinction between leading and managing is coming to an end. In today’s world, employees no longer work their way up a “career ladder”, from a manager to leadership position.

Instead, more and more companies are equipping employees with the tools and support to become leaders early on in their careers, ultimately developing them as coaches.

Which means that when they come to manage a team, they can understand the drivers, strengths and weaknesses of each team member, using this to coach them, rather than tell them what to do.

Leadership in an age of algorithms

“If management’s aim is to promote stability, order and consistency in producing the best outcomes possible, then working with data is a key principle to optimise the management of any organisation.” Algorithms are “uniquely fitted” to data management: working fast, systematically and avoiding bias. Except, perhaps, the bias of the data they are fed.

None of this is far into the future. Amazon already has an  algorithm that manages employees. It can even fire an employee. Using algorithms to track performance data will speed things up, but what we need is proper human oversight of these algorithms.

This issue was illustrated in Ken Loach’s recent film “Sorry We Missed You”. Ricky, is a self-employed delivery driver working under extreme stress. He is monitored minute by minute. When things go wrong, that are beyond his control, his boss shows little to no empathy. It’s not the data tracking that's worrying. It's the lack of humanity.

“Rather than focussing on whether humans can withstand the rise of algorithms in management positions wouldn’t it be better to shift our focus to the unique abilities that algorithms do not possess?”

Leaders of the future will need a human touch according to De Cremmer. They need critical thinking, curiosity, agility, imagination, creativity, ethical judgements, emotional intelligence and empathy. Algorithms are not well placed to lead in this way.

But what about teams?

Teams in the future will include both humans and algorithms.  Algorithms will be part of the team. Leaders will need to be better equipped to lead both humans and machines. The skills to manage a team including an algorithm are new:

So, the evolution of technology will have two distinct impacts on how we lead.

On the one hand it will mean that we focus on that which makes us human in how we manage people. But we will also need to become used to manage diverse teams that include algorithms as well as humans.

The old fashioned distinction between leading and managing is coming to an end. We no longer work our way up a “career ladder” from manager to leadership positions anymore.

Leaders therefore need to be developed early on in their career. Which means that if you're not already doing so, you need to be focusing on your leaders in the making. In other words, the next generation of leaders across your organization.

At Saberr, we equip managers at all levels—from high potential (HiPo) employees and entry-level managers, right through to executive leaders—with the tools and support they need to lead high-performing teams.

We do this using a combination of experiential and digital coaching, helping them develop the right skills, habits and routines so that they can develop as coaches in the flow of their day-to-day work.

You can learn more about how Saberr's digital coaching tool can support your leadership development program here.